In a user survey we designed and distributed via social media networks, we asked participants whether they thought an MT word-level auto-suggestions feature could be helpful, and provided a simple definition and an illustrative image. If their answer was “Yes”, the respondent was asked to specify a reason. By the time of writing this article, we received 41 responses to our survey. While we do not believe this survey is enough to justify introducing an auto-suggestions feature into every MT system, it can be an indicator as to why some users think such a feature could be helpful.

To answer the question, “Which of the following best describes you?” 46.3% (19) of the respondents chose “Translator/Linguist”, 31.7% (13) selected “NLP Engineer/Researcher”, and the rest 22% (9) were other “MT Users”, not included in the two aforementioned categories.

Out of the 37 persons who believed a word-level auto-suggestions feature can be helpful, 40.5% (15) of the respondents specified that it can give them some inspiration. This answer is specifically interesting as it is not constrained by time-saving benefits; hence, it focusses more on effectiveness rather than efficiency. The respondent that answered with “Other” mentioned that it allows them to look for alternative senses or phrasings, especially when they suspect the initial translation is bad, and referred to this as “human in the loop”. 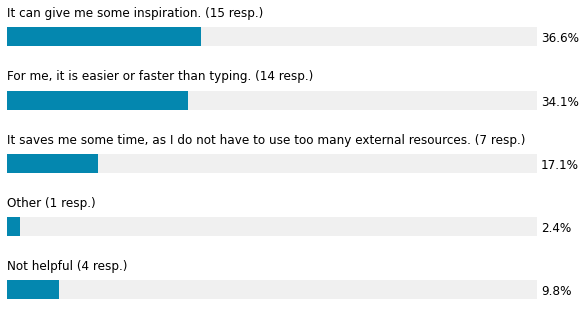 Respondents were allowed to give extra comments; among the notable comments were:

I think word-level suggestions can be a useful feature, particularly when the target language can have several translations of a single source word.

Word-level suggestions can be helpful, but sometimes you end up spending a lot of time figuring out if the MT suggestion is a valid translation in that context. So, I’m not really sure yet how I feel about it.

It’s useful, as long as it’s seen as a suggestion, and not inserted in the target where the translator is typing.

Among the respondents who answered “For me, it is easier or faster than typing”, comments included:

Though most of the time; the suggestions are lousy.

I don’t think it gives me inspiration as I mostly need it for structures, not single words.

Auto-suggestion does not have to come from machine translation. History is much more useful.

The last comment above might be referring to the fact that in some CAT tools, auto-suggestions can also include glossary terms, and translation memory sub-segments, which encourages further research efforts to investigate methods to enhance leveraging and interaction between various translation resources in human-in-the-loop environments.

We hope this survey will inspire future user studies to look deeper into how diverse users of MT and CAT tools prefer to utilize certain features, such as auto-suggestions, and the value they seek. More aspects should be taken into consideration such as language pairs, translation workflows, and user interfaces. This can help improve these features to better support linguists and other MT users and boost their productivity as well as translation quality.